The wonder-filled life of a single older-ish mom.

Archive for the tag “why parents drink wine”

Or maybe it should be called “Monday’s WTF?”

It was Nina’s bedtime, and she said she had to take care of something in the kitchen first. When I checked on her a few minutes later I found her spreading a massive glob of grape jelly on a PBJ sandwich. She had already made three sandwiches, and had them stacked one on top of the other.

“Why are you making so many sandwiches?!” I said with exasperation. “Are they for bed? For lunch tomorrow?”

When she didn’t answer but instead added the fourth sandwich plus a toy crown to the stack I shrieked, “What are you doing?”

She turned to face me and said proudly, “It’s for the History of Sandwich-Making Museum. I guess you’ve never been there if you didn’t know that.” 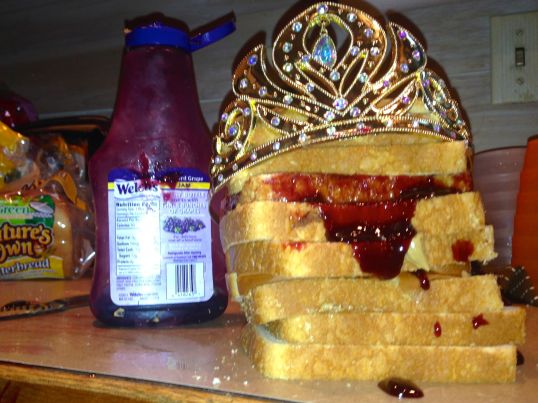